Self Drive Safari Goer tells all 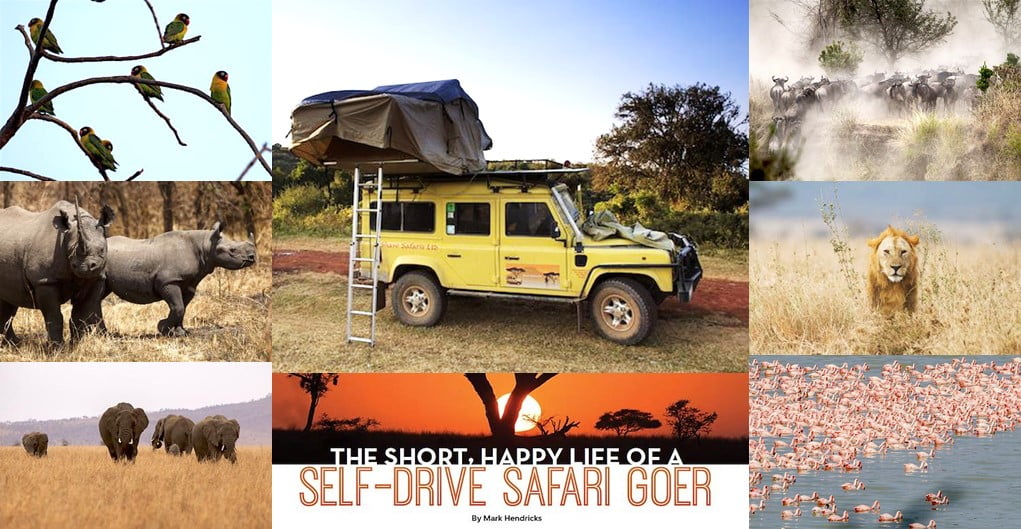 My friend James, a wildlife guide, warned me, “And whatever you do, do not run over a Maasai’s goat.” Check. I never plan on running over animals so I should be fine. “I’m not too worried about that,” I say with a sharp grin. “I’m serious,” he said. “You won’t be able to reason with them if you hit a goat. They’ll tell you it was pregnant and still had generations of goats to give birth to. Even if it was a male.” So much for warnings about ferocious lions and aggressive bull elephants; it was goats that I would have to be extra diligent around in the east African bush. For my adventure seeking wife and me, Africa was always a dream. But we wanted to experience it on our own, without tourists who were in a rush to get back to luxury tents to sip on mango infused cocktails. Not that there’s anything wrong with that, but we wanted adventure. We sought the thrill of the “Big Five” of African game – the lion, leopard, elephant, rhino, and Cape buffalo. Think Hemingway and Roosevelt but armed with an 8.5-pound 500mm lens. We wanted to meet locals and experience their culture but not in a controlled tour. Think a neighborhood bar, but with the occasional vervet monkey that might steal your beer.

After researching our options we decided to embark on a month long self-drive safari in Tanzania. We could travel at our own pace and experience the bush how we want, which is very important for my career as a conservation and wildlife photographer. However self-drive there is quite rare. The practice is much more commonplace in more developed countries like South Africa and Zambia. Luckily we found Shaw Safaris, a Tanzanian company that provides the service. Founders Paul and Erika Sweet formed the business when they realized there was an opportunity to cater to more adventurous travelers to the country. “We set up in Tanzania as we saw there was a large gap in the market,” says Paul. “Tanzania is for the real adventure. Full strength, raw Africa as opposed to a softer option in some of the more developed countries. We feel if you are outgoing and up for a different type of experience then you can enjoy all that Tanzania has in a much more personal way.”

We mapped an itinerary where we would visit and camp primitively in some of the country’s most famous parks: Tarangire, Lake Manyara, Serengeti, and the Ngorongoro Crater. Shaw would provide us with a fully equipped safari vehicle with a roof tent, a few days’ rations of food, as well as cooking supplies, tools, and spare car parts. Additionally, Erika provided us with towns to visit where we could refuel and resupply.

The headquarters is located outside of Arusha National Park. Here the couple own and operate Twiga Lodge, where we rested and learned how to safely maneuver our safari vehicle, a large manual transmission Land Rover belovedly named “Pastor.” Paul informed us that it was purchased from an old missionary. Maybe it’ll bring us salvation?  We would need that if our practice runs were any indication. A few missed turns here, almost flipping the vehicle over a large boulder there; at the very least I hope “Pastor” accepts my atonement for previous speeding tickets. After a slightly disastrous performance, Paul recommended that we change our itinerary and spend a day and night in Arusha National Park where we could have more practice. Lush and green, the park, devoid of lions, is excellent for herbivores, as well as a sublime view of Mt. Kilimanjaro’s western summit. The most stunning sight was the thousands upon thousands of greater and lesser flamingos that congregate in the lakes of the park. After a few hours of getting used to shifting gears on the hilly terrain, we arrived at our campsite where we were greeted by a lone bull giraffe. It was in this moment when we truly arrived in Tanzania. Our campsite, surrounded by jungle foliage, was our front row to an evening symphony of tropical birds and black and white colobus monkeys. A very serene moment, though this peaceful feeling would not last as our tent was overtaken by curious monkeys in the middle of the night. Innocuous in their approach, they were most likely in search for food but were very, very noisy.

The following morning we, after drinking copious amounts of caffeine, departed for Tarangire National Park and drove through the busy streets of Arusha where we experienced the most difficult roads. The colorful streets are full of people, bikes, and cabbies. The key is to simply take it slow, and you’ll be fine. Tarangire National Park is most famous for elephants and its high concentration of ancient baobab trees. Warthog, impala, and Thompson’s gazelle abound. Hornbills perch on acacia trees, ostrich frolic on the dry land, and lilac-breasted rollers take to the sky. We camped in the most beautiful site where I have ever pitched a tent; a primitive site surrounded by baobab trees. At dusk, a large flock of lovebirds roosted above us and two wildebeests ventured past our vehicle. In a moment of déjà vu, something outside investigated our tent in an almost serpent like fashion. A large grunt confirmed it to be an elephant. Even in the dead of the African night the encounter left an electricity in the air, which continued through the next morning as we encountered a pride of lions on a wildebeest kill as we departed the campsite, most likely one of our visitors from the night before.

Next on our itinerary was Lake Manyara National Park, which is most famous for its namesake alkaline lake. Its forests are filled with baboons and blue monkeys. While driving through the jungle one must be careful of the occasional elephant or Cape buffalo that crosses the road. Fate smiled upon us here, as we were the first to kayak in the lake after two years of low water levels. A guide who patrols for hippos accompanied us and around the lake we observed pelicans, flamingos, and giraffe. The birding was spectacular, and we were gifted with a close encounter with a pair of beautiful little bee-eaters.

The southern road to Serengeti is a corrugated, dusty behemoth of scared tarmac. This driving is what locals call an “African massage.” Worse was the domesticated goat. As the great oracle James foretold, be weary of these suicidal goats. Some would run toward the vehicle as soon as we came around a bend, while others would refuse to move. We were at the mercy of their indifference to life on the African plains. And it was in Serengeti where we experienced many incredible moments by our lonesome. One morning we had breakfast in the midst of 20,000 migrating wildebeests and hundreds of zebras. Later we watched a very pregnant cheetah unsuccessfully chase a gazelle. Two bull hippos battled for dominance, their grunts louder than their splash. Hyenas played outside our campsite.

One animal I hoped to encounter was the black rhino, though seeing them in Serengeti National Park is extremely rare. Poached to dangerously low numbers, there are only around 30 in the entire park. We explored the small, rocky hills of the moru kopjes region, where your best chance of catching a glimpse of the rare beast is. Elephants, buffalo, secretary birds, and jackal were all encountered, but no rhino. Even a leopard crossed our path. A master of camouflage, we watched as it blended into the long grass and, almost apparition like, silently disappeared. However on our way to the Mara River to observe the great migration we stumbled across a mother rhino and calf in an area of Serengeti that they are not normally found. We spent an hour with the pair and they even took a mud bath next to us. Later we informed a ranger of the encounter so that they could send anti-poachers to look after the pair. After thanking us, he looked at us, dumbfounded, and asked, “She didn’t charge?”

Finally we visited the Ngorongoro crater, a microcosm of Serengeti and the world’s largest intact volcanic caldera. Descending the crater before sunrise was quite exciting and we watched two large lionesses’ steal a wildebeest kill from a pack of hyenas. Getting around here is much easier than other parks because of its small size. That night we camped along the crater rim, the sky obscured by thick montane forest where the temperature dipped to freezing. A tropical boubou, a songbird, serenaded us to sleep with its beautiful song. Feeling melancholy that the adventure was almost over, my wife drove through the streets of Arusha, which was much simpler now, as she had become quite the pro with the Land Rover. When we arrived at Twiga we were greeted by Paul and Erika who listed intently as we recounted our adventure over laughs and tea.

What I experienced in Africa was everything I could have hoped for. I came for parks and wildlife but left with lifelong friends and a deeper appreciation of my wife. Without following our own path these moments could not have happened. A self-drive safari was the perfect way to begin our adventures in East Africa and I cannot wait until our next one.

Categories
Archives
Recent Posts
With our great friend, Langoo from Lake Natron who

Good work Team Twiga to get these guys back on the

Thank-you Julie for the beanies. Much appreciated

Jamming at Twiga Lodge with Barry…. Thanks for t

Lemons from the garden and Gin....how blessed are

And here is the male voice choir from Ngongongare

Here’s a few of the beautiful birds we spotted o

Love watching these birdies eating bugs after the

Love this little grasshopper! Anyone know the name