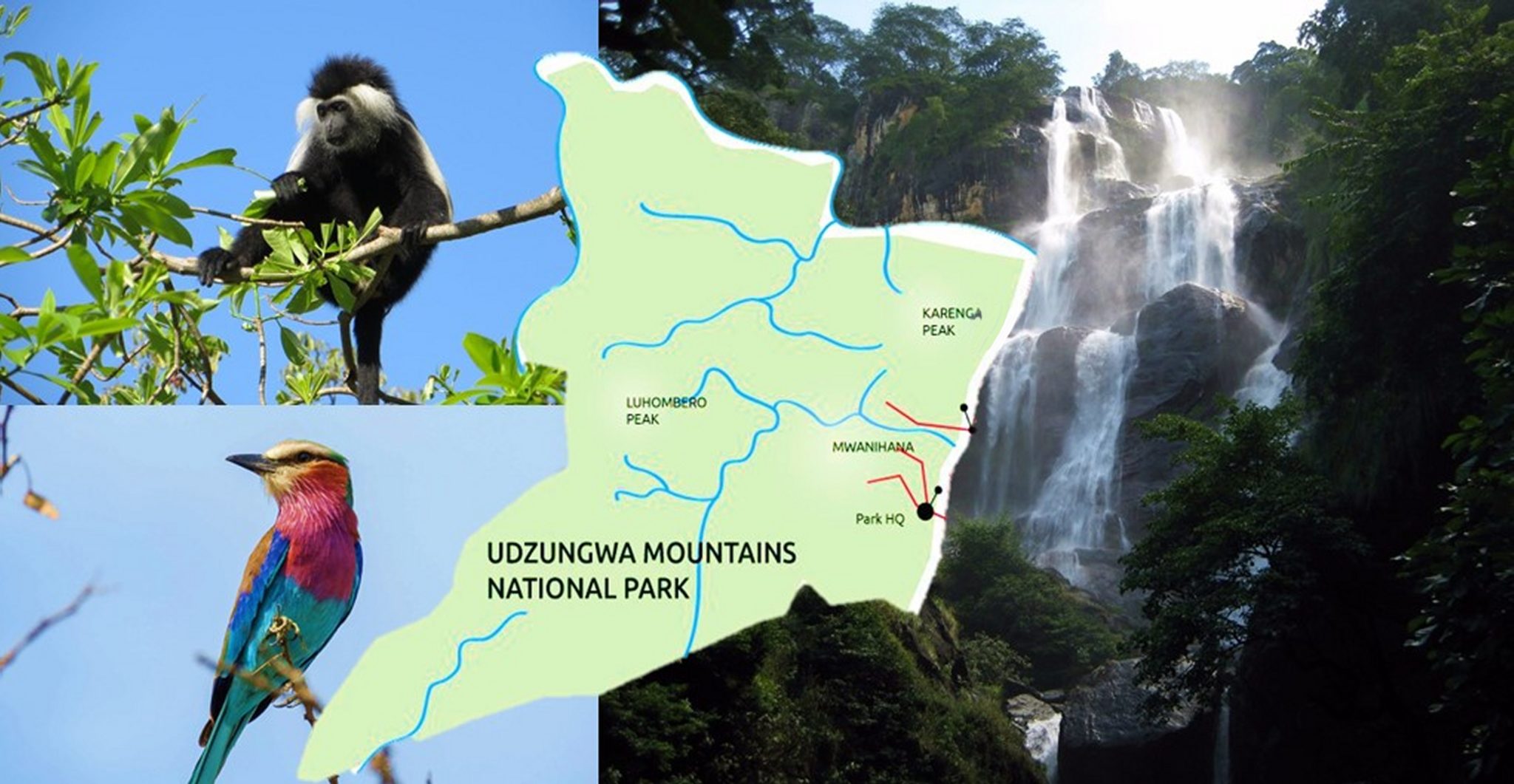 Tanzania’s wildlife reserves are usually synonymous with sun-baked, acacia-studded plains. However, there is also the option of a refreshing visit to the jungle-cloaked Udzungwa Mountains National Park. Guidebook author, Lizzie Williams shares her experience and makes the case for visiting this ‘enchanted forest’…

Lizzie ventured to the Udzungwa Mountains as part of her self-drive safari of Tanzania’s ‘southern circuit’. She started her journey on the north-western side of the Udzungwas along the Great Ruaha River gorge, coming up the Tanzam Highway from Ruaha National Park. The lush green tree canopy looked cool and inviting, especially after her hot and dusty game drives. It was a chance to stretch the legs and see an unusual creature or two.

The approach to the park was from Mikumi, where the major A7 road links Dar es Salaam with Zambia. From here a scenic 60km drive took Lizzie south along the Ifakara road and onto the floodplain of the Kilombero Valley; a cultivated agricultural area fed by the streams from the Udzungwas. Lizzie drove through sugar cane fields and rice paddies, crossing several bridges, including the Great Ruaha with its hydroelectric power station at Kidatu. Now she noticed the steep eastern escarpment rising higher on the right, cloaked in a dense, sweet-smelling, canopy of giant trees. And she saw waterfalls cascading down the exposed rock faces.

The Mang’ula village is the location of the gate and headquarters for the Udzungwa Mountains National Park. Here Lizzie settled into her tented camp. While sipping sundowners and admiring the mountains, a troop of Udzungwa red colobus monkeys scampered through the branches. With their infectious chatter, lively brown eyes and bright red mohawks, Lizzie thought they were a great meet-and-greet introduction to the enchanted landscape.

Located between Morogoro and Iringa, the Udzungwas form a portion of the ancient Eastern Arc Mountains. This fragmented collection of peaks, with dense forests and high rainfall, lies to the east of the East African Rift. It stretches from the Taita Hills in southern Kenya, south-west in a curve through a dozen separate mountain blocks, including the Pare, Usambara, Uluguru, Ukaguru, Udzungwa and Rubeho mountains of Tanzania. In wetter periods, forests spread across these valleys, but when the climate dried, the jungle shrank back up the mountain slopes. In an evolutionary sense, the Eastern Arc is an ‘archipelago’ of ‘mountain islands’. As such, populations of different plants and animals became genetically isolated. Today, many species are endemic to the Eastern Arc as a whole, and some to a single mountain range or ‘island’. It’s no wonder it is often dubbed the ‘African Galápagos’.

The Udzungwa is a mountain block, partly designated as a national park. It is bordered by the Great Ruaha River in the north and the Kilombero Valley Floodplain to the south-east. It covers 1990sq km, almost one-fifth of the entire 10,000sq-km Udzungwa range. The area had some protection since the British created forest reserves in the early 1950s. However, it was officially inaugurated as Tanzania’s first national park to be declared on the merits of its forests in 1992 by World Wide Fund for Nature (WWF) founder and president, Prince Bernhard of the Netherlands.

The Udzungwas’ closed-canopy forests are completely intact and span altitudes of around 250m in the low-lying Kilombero Valley to the highest mountain, Luhombero Peak, at 2579m. This gradient, annual rainfall and the high number of streams and waterfalls, creates astonishing botanical diversity. Of the 2500 trees and plants, 25% are endemic, including some rare species of African violets. Easily spotted are the plentiful and colourful birds; from fly-catchers and hornbills to sunbirds and shrikes.There is also the rare rufous-winged sunbird and the Udzungwa forest partridge. Of the forest antelope, the Abbott’s duiker is only found in a few scattered enclaves.

When it comes to primates, the Udzungwa red colobus and the Sanje mangabey are unique to the Udzungwas; both classified as ‘endangered’. And there are also and six nocturnal primates, like the the popular bushbabies. Seen boisterously bounding through the trees are Angolan black-and-white colobus, Sykes and vervet monkeys and yellow baboons.Udzungwa’s smaller endemic creatures include the grey-faced sengi; a type of elephant shrew, toads, tree frogs, chameleons, forest geckos and skinks. Additionally, there are thousands of species of spider and over 500 butterflies, among the highest recorded numbers of any range in the Eastern Arc.

There are no roads in the park, just walking trails, which vary in length and weave through sunshine-dappled glades, blurred by the colour of butterflies. They wind up into the mountainous jungle, thick with hanging vines. Trees rising to 30m, with trunks covered with mosses, lichens and ferns. A good start is the walk to the Prince Bernhard’s Falls which is only 500m from the park gate. There are also trails to the Njokamoni Waterfall, a 40m single drop into a shallow pool where you can swim. Fit hikers with camping gear can attempt the 38km Mwanihana Trail to the second-highest peak at 2150m. Finally there is the 65km Lumemo Trail from Ifakara through a wide range of habitats and up into the remoter regions of the Udzungwas.

Lizzie paticularily enjoyed the half-day return to the top of Sanje Falls; a stunning series of cascades that plunge 183m through misty spray into the gorge below. The track zig-zaggs steadily up the mountain over an elevation of 430m. Lizzie describes it as fairly easy and enjoyed being shilded from the sun by the beautiful tree canopy. There were plenty of viewpoints from which to admire the impressive three-tiered falls, and rock pools to cool off in. The plateau of smooth boulders at the top made for a perfect picnic spot whilst the views south across the Kilombero floodplain were tremendous. Lizzie could clearly see the Mbarika Mountains rising out of the lowlands of the Selous Game Reserve 100km away. All in all a most stunning addition to her self-drive safari adventure.